A place for all Digimon and tickling fans! If you don't like Digimon or tickling, don't join! Advertising is forbidden!

Hm, anyone in the mood for a tickle fight? 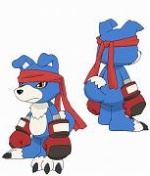 sure. I got a few different characters you can choose from.

Well there's Blackie, which a hve described in Phuramon come on down. Blackie has a brother, which is also a fox hybrid like her with more or less the same features, but with different color. His fur is yellow like Renamon's , he has light blue eyes an short, yellow hair, with( like the hair of henry from tamers, but longer and wilder). . His feet are more human like with five clawed toes , pale human skin on the bottoms of his feet and white fur at the tops. he also has different powers than his sis

Then there's Amelia, my Ranmon char and Sieg my Gatomon char. Here are some pics of them:

Then there's a Ranamon-Char named Amelia with blue hair instead of that strange helmet and in a different out fit ( jeans and t-shirt).

Which one of these would you like to battle?